Our bedroom now is an actual room… A place to relax… 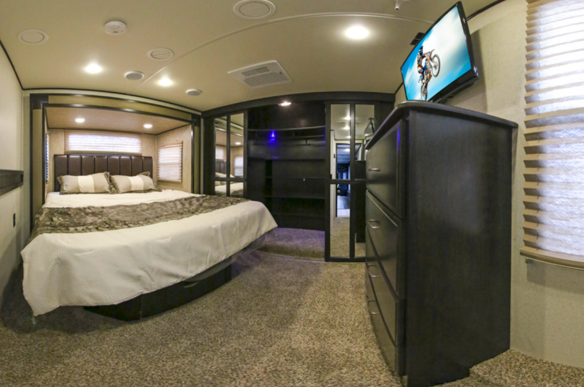 Our bedroom in our previous camper was a bed.

This was it. You couldn’t walk at the foot of the bed. And this was pretty much the extent of our closet/dresser space.

Just to give you a visual, because I know I keep comparing the two campers, but we do just have so much more room now, here’s the floorpan for the 26′ Wildwood we had and the floorplan for the 43′ Momentum we have now.

I’m pretty sure the bedroom is Allen’s favorite room. It might be Charlie’s favorite too. 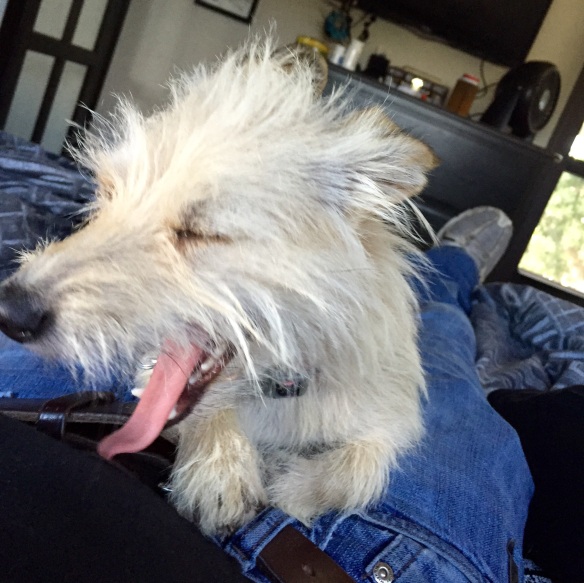 We have a king size bed and we finally found some sheets we love! (100% cotton=amazing) The mattress is super comfy, but we still have our short queen size memory foam pad on top (we are waiting for our Walmart Savings Catcher money to add up to get one that actually fits!) Hahaha

The bedroom is the only room with carpet, unless you count the strip in front of and under the couch. Charlie has a bed on either side of our bed and one in the closet, but she still sleeps with us of course!

The closet has shelves across the back and shelves and a bar for hangers on the left. It DID have the same thing on the right but we put a washer/dryer combo in. My mom got it for us for a housewarming gift – thanks mom! The washer/dryer is SO nice! I LOVE not having to lug everything down to the laundry room in whatever campground we are in. And the money we save is crazy; when we aren’t paying electric!

Thank you Camping World for the image.

We have a dresser with 4 drawers and a TV above that. The bed lifts up for more storage. It came with a built in safe and an ottoman that pulls out from the foot of the bed and opens for even more storage. The ottoman is also Charlie’s step stool and she will sit and whine if it isn’t pulled out for her. We have 4 windows in the bedroom (3 that open). And our bed is in the third slide. I definitely wanted a bed that was sideways when we started looking. I guess I just wanted something different.

Oh, and there are LED lights in the closet too.

There are outlets on either side of the bed. Our closet doors have mirrors on them and the bedroom door is frosted. We have an A/C in the bedroom with its own thermostat. It gets warm in the bedroom, I think because the ceiling is lower, there’s carpet, and the exterior of the nose is painted black. So that A/C works the hardest.

The main bathroom is next to the bedroom. It has a large shower with an adjustable height shower head and a seat. We have a 12 gallon hot water heater now (5 gallons previously) and Allen thinks it’s bad for the environment because it encourages him to take super long showers. We never had that luxury before! There’s a vent fan in the bathroom (no rain sensor this time), it has a vessel bowl sink that I love. The countertop almost matches the kitchen. There’s a medicine cabinet, a storage cabinet under the sink, 3 drawers, and a big linen closet that is super deep. The toilet is a foot flush and a porcelain bowl. (Fancy, fancy!)

Our bathroom will never be this clutter-free again (sorry babe), so I had to steal this photo from Grand Design.

The half bath has just a toilet and sink, but it DOES have a window!

It’s recently occurred to me, as I’ve been checking out other RV blogs, that I’ve never actually given a tour of our camper… In the blogosphere at least! I love our home, and I’m proud of it, so here it goes!

We live on the road full-time in a 2015 Grand Design Momentum 385TH.  We bought it in March from Palm Beach RV in Florida.  We looked for months (at least 6) and went to numerous RV shows in multiple states, visited dealers, looked online and read reviews.  We knew we wanted a 5th wheel. We knew we wanted a toy hauler (that’s what the TH stands for in the name).  And we knew we need at least a 12ft garage to eventually fit a Smart car.

The rest we kind of decided along the way:

***Notice the order those are listed in: my top priorities first  😉 -I’m writing this post so that’s allowed!

The Momentum 385TH met our wants and needs, and even more. So, we went for it!

The morning after we picked her up, at Palm Beach Traveler RV Park, we were ready to take off for the muddy swamp that some call Louisiana!

I’ll start with the basic exterior features, then work my way through the inside.  I’m going to list DIYs and MODs we’ve done as well.  I always find it interesting and helpful to see what other RVers have done, so I’ll share our little tweaks (and issues we’ve had along the way also).

The camper (some people say fifth wheel, some say rig, RV, etc., I just refer to her as a camper) is 43′ long. Here’s the basic layout and numbers:

Some of these photos I took from Grand Design’s website, others are my own. You can probably tell the difference!

It came equipped with a Onan 5500 generator in the front that can run everything. We have run it all night long on less than 5 gallons. There are 2 – 30gallon fuel tanks. One that feeds into the generator. And one that has a pump that you can connect to pump fuel into your toys, motorcycle, car, etc. or pump into the generator tank.

There are 3 slides, 2 electric awnings (the main awning has LED lights across it), 2 entry doors (with aluminum steps that won’t rust), a patio that folds down in the back with a manual awning over it, frameless tinted windows, 3 air conditioners, heated tanks with an insulated and heated underbelly (which will help like crazy this winter if we get stuck somewhere cold like last year! – Oklahoma City… Frozen water lines… Frozen toilet… New toilet… Not fun…). There are LED lights under the steps and flood lights in the back.  We opted to add a Xzilon coating to the outside, as well as the inside (which guarantees we won’t have to wax it for 5 years).

There is a large pass through cubby in the front-ish.  The generator is actually in the very front.  But it’s to the right of the front door.  All the cubby doors slam-latch closed, and most of them have magnetic something or others that hold them open.  The pass through cubby is heated so things, as well as water lines won’t freeze in the winter. 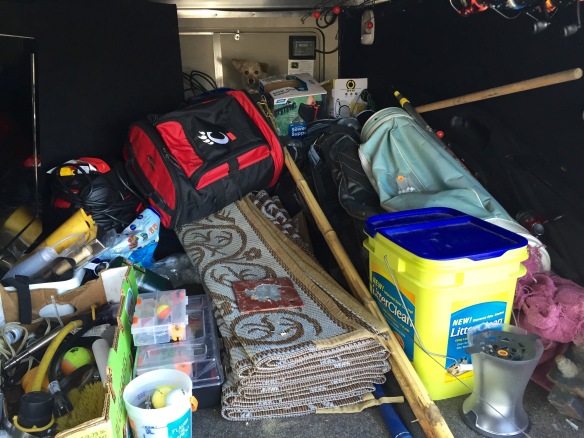 The camper came with a swing arm for a TV, and we just mounted the TV from our old camper on it.  I like being able to sit outside and watch the race or a game (or occasionally Dr. Phil-Allen’s favorite! Haha! Just kidding…). We used to have to set up the white folding table and run the cord out through the door if we wanted to watch TV outside.  Which wasn’t so bad either, just more work. 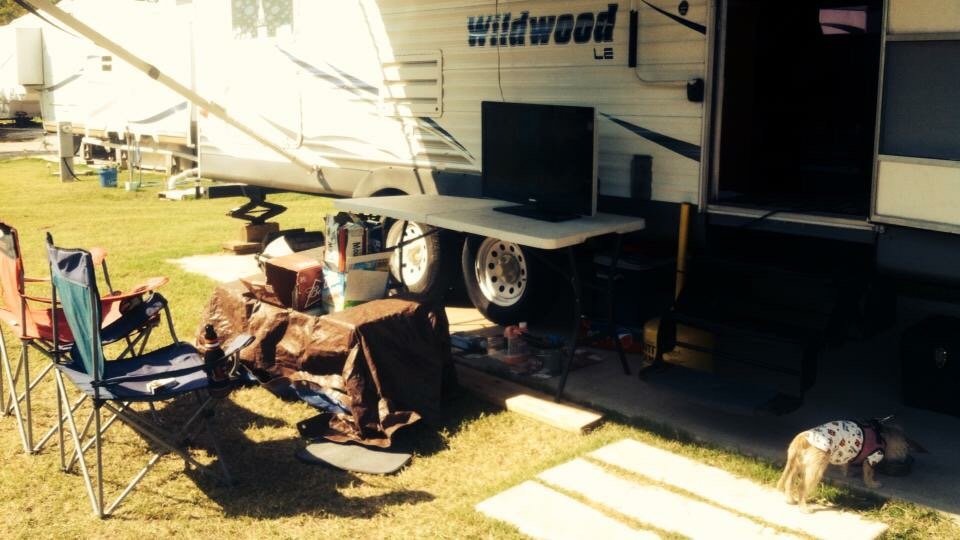 I’m going to give you the tour in parts… If I did it all in one post, it would be ridiculously long! But I will link them all together as I get them written!