I made all these for our friends and family Thanksgiving dinner… (I planned ahead, big time!) But I’d highly recommend them if you’re making Christmas dinner! They can all be made in a tiny camper kitchen (like ours) also! Enjoy and please let me know what you think if you try them! 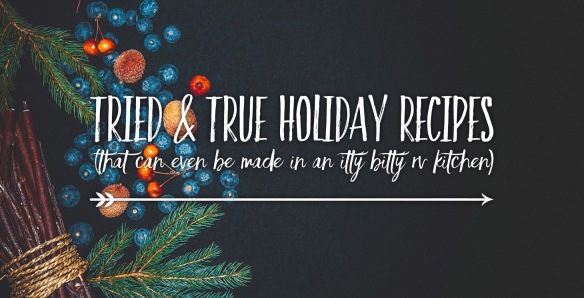 **This is a time consuming dish to make!**

I made my rice in the rice cooker (because I’m terrible at making rice!) and let it cool then stuck it in the fridge overnight.

In a heavy pot, combine the chicken livers, broth, 2 cups of water, parsley, pepper, the quartered onion and a little salt. Bring to a boil. Reduce to a simmer for 8-10 minutes. Remove the livers to their own dish to cool to the touch and continue to simmer the broth for about 30 minutes. (You can probably chop the chicken livers into little pieces while you wait)… Strain the liquid into a bowl, tossing out the onion, little meaty bits and parsley.

Now get out a large skillet and make your roux. Combine the oil and flour over med-low heat and whisk until it turns a dark brown color. Add the veggies to the roux, stirring to wilt and soften them. Add the stock a little at a time, stirring to combine, avoiding any large clumps. Simmer the “gravy” for 30 minutes then add the livers you chopped while the stock was finishing simmering!

Once that cools, you can stick it in the fridge with the rice. Bring them both out the next day about an hour early so they can come to room temp before you mix them. Give it a taste and add your green onions, cayenne and salt to taste.

Stuff into the turkey (that’s how I did it) or bake it covered until it’s nice and hot!

This was really, really good stuffing. I was surprised how much everyone really loved it! I’m definitely making it again!

“Not your Norm” Creamed Corn

I would totally put a link to where I got this recipe from, but the truth is, I wrote about 3 down, had some ideas in my head, and just kind of threw it all together at the last minute! But it was a huge hit! Even my super picky friend liked it, and she usually sticks to plain hot dogs and ketchup (she’s 32… I know… I’m working on her!)

Combine all that together, put it in a sauce pan over med-low heat, stirring pretty often until the sugar dissolves and the cream cheese melts then give it a taste. You may need to add more sugar or salt to your liking. I had never tried creamed corn before so I had nothing to compare it to. But I would eat it again!

Mix the beans, soup, soy sauce, pepper and 1/2 the onions together and put the mixture in a greased baking dish. Bake at 350* for 30 minutes until hot and bubbly then add the rest of the fried onions for an extra 10-15 minutes until they start to brown. Can’t go wrong with a classic!

Combine all those things and put it in a greased baking dish. Bake on 425* for 20-25 minutes, until hot and bubbly around the edges. Serve immediately! **This made a LOT. It was delicious but I think next time I’ll cut the recipe in half, especially if it’ll only be me and Allen enjoying it!

**The easiest, most versatile dip you will ever make that EVERYONE loves… Great for tailgating also!

Swear. Easy. Mix the two together and refrigerate until you’re ready to serve it. Delicious. Every. Time.

Put the potatoes, water, garlic, and salt and pepper in your slow cooker. Cook on high 4-5 hours or low 8-9 hours until potatoes are good and tender. I mash mine with a hand masher and add the butter first. Followed by the cream cheese and sour cream. Then finally the cream or milk to get them to the consistency I want. Remember to taste! And don’t be afraid to add some parmesan or green onions if you’d like that!