The 47th Annual RV Super Show was this past weekend in Oklahoma City at the State Fairgrounds. We usually don’t make it RV shows until Sunday because that’s when Allen is typically off work but we went Friday evening instead. I think Thursday and Friday are the days to go because it was a lot less crowded!

We really wanted to see the new Grand Design with the tiny garage, but we also wanted to look at other brands. There are a lot of Grand Design owners who are absolute die hard fans. I like ours, but I don’t end every sentence with “I love my Grand Design!”. I’m also not convinced that everything about it is the best in the industry. Before anyone jumps all over me, yes, the customer service is great, but there’s also room for improvement. That being said, we spent about 3 hours walking around, looking, and to be honest, judging. Here’s some things we noticed:

For example, we went in one huge Class A, $500K+ show price, and the bathroom door wouldn’t even close all the way! They’d put the hinges on crooked or something… That’s ridiculous to me! In the same camper, there was a built in silverware holder in one of the drawers, but it was about 1/2″ too narrow for the drawer. So you had a tiny slit that I know would get full of crumbs that would be nearly impossible to clean out.

In another camper, a 5th wheel, there were exposed PVC pipes in the bedroom closet where the washer/dryer hookups were. Then more exposed PVC in the large cubby. It just looked junky to me. They could’ve taken the time to build a wall or something to hide that. In yet another unit, the hole for the fireplace was too large, so there was 1/4″ gap along the top of the fireplace where you could see wires and what not all behind it. I’m pretty sure this was in a Luxury Suites, and those things are expensive!

We saw that you can add, maybe it’s an option, cup holders to go in between the couch cushions. I thought they were neat until I sat down. The cup holder went sideways. They just stick between the cushions. I’m glad we didn’t waste money on those.

There’s a new patio rail system for the toy hauler porch now. Ours is aluminum and we’ve said from day 1 that there has to be a better option. Well, they finally came out with something. It fits into a groove in the frame, I believe, whereas ours is totally removable. But it doesn’t scrape the floor, or go crooked like ours. I was trying to see if it could be added, and if it would work with our 3 season patio doors. I asked a salesman but he didn’t know. He went to ask the Grand Design rep and just came back with a business card, telling me to email the guy with my questions. I was pretty put off by the fact that the rep couldn’t take the time to come talk to us himself, especially since we OWN a Grand Design already. I posted something about our experience on Facebook and within the hour had a private message from the rep apologizing. So that was nice. It would’ve been nicer to have gotten to talk to him in the first place…

Something else we found, patio-related… On the new Voltage toy haulers, the ramp door has spring assist! Bo Simpson from RV General Store was the friendliest and most helpful person we came across at the show. (I think we tend to get overlooked because we are younger and don’t look like we can afford things… Maybe…). Anyway, Bo told me to go close the ramp door. I started to hand him my beer but he said I could hang onto it. I closed it one handed! It was pretty doggone amazing! Now, I’m not super strong by any means but I’m not a total wimp either. I can open and close our ramp door, with all of my muscles in play, IF the back end is low enough where I can get some good leverage. I would really LOVE to have the spring assist added. I’m not even sure if it’s possible. But it’s definitely something to look into!

Sometimes it’s the little things! Right now we have a free standing toothbrush holder that I stick in the medicine cabinet whenever we travel. Which is fine, not a big deal, but anything that makes traveling and getting ready to travel a little quicker, in my opinion is better. So I want to add one of these for sure. 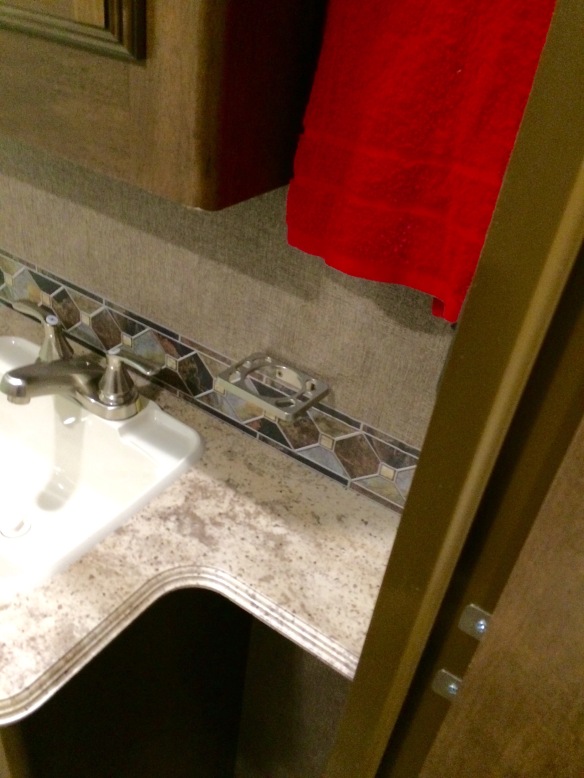 STOVE TOP WITH NO OVEN

Lots of the campers we looked at didn’t have a gas oven, instead they just had the cook top range with a convection microwave. The camper ovens are so hard to cook in because they are so small. Ours in our Momentum is bigger than most, but it still sucks. I’ve used it maybe twice before I figured out the convection deal. Now I just store tupperware and muffin tins in there. I really want to remove it and have Allen put in some kind of cabinet or shelves… We also saw a few different types of stove covers. What we have now are two pieces of the same countertop material. They are pretty heavy, and I have to find a place to put them when I use the stove. We saw one stove that had the whole top piece lift up on a spring assist type of hinge and it turns into your backsplash. We saw another that was a glass top, that bent in the middle and leaned back against the backsplash. I think that one would be the easiest to add to ours. It was on a Suburban stove, which is what we have, so I may call them and try and figure something out. 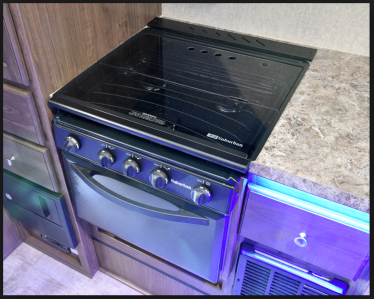 This was the first I’ve seen where the bathroom is in the front nose of the camper. One that we saw had his and hers sinks and a big closet. It was an actual room instead of just a closet with the essentials. I thought it was really interesting.

By far, the second coolest thing we saw, second to the spring assist ramp door, and the thing we might actually be able to afford, was this magic mirror! It was in the bedroom of a Landmark. The TV is behind glass, surrounded by a picture frame. You turn the TV off and it’s a mirror! SO neat! And I thought it was a great use of space, giving you two things in place of one. We got our Trailer Life magazine the next day and it was mentioned in there too. I want one!

Overall, we had a great time and saw some really cool things. Afterward we went to Trapper’s for dinner. That was delicious! We had some raw oysters for an appy, then Allen got the Redfish and I had Swordfish… Yum! I’d say it’s a must try restaurant if you’re in the area and like seafood!