We were down in Orange City, Florida for 2 weeks while Allen was working on a tower there. They finished up the Tuesday before Memorial Day and we were supposed to head to a job near Pine Bluff, Arkansas. Then the customer in Arkansas decided he didn’t want to be off the air while they worked on his line for his antenna so he was contemplating getting a standby antenna (so he could still broadcast but his signal just wouldn’t be as strong as the main one). So the company told us to sit tight while he decided. All the equipment was on the site in Orange City that they needed in Arkansas so we got a couple days off.

We went to Blue Springs State Park the first day. There’s an aquifer where fresh water comes out of the ground at 72 degrees year round and feeds the St. John’s River. It was beautiful, plum full of huge gar and other fish… You can swim but we didn’t get in because it actually wasn’t too hot out.

The next day we went to DeLeon Springs, another state park not far from Orange City RV Resort where we were staying. There’s the same sort of aquifer, 72 degrees year round, but this one is sort of built up to be more of a swimming attraction. There are no fishies, and there are lifeguards. We got in this time and it was like taking the polar plunge! There’s a pancake house at an old sugar mill right next to the spring where you make your own pancakes (aka Allen takes me out to breakfast and I still cook for him!) 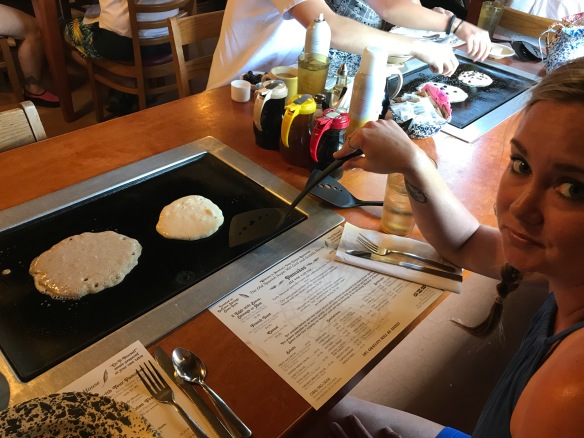 By Friday, they knew no matter what, because of the weekend and the holiday, we weren’t going to get a truck until at least Tuesday morning so we made plans to head over to the coast. We went to Port St. Lucie RV Resort for a couple nights. We had an early dinner at Conchy Joe’s (fabulous!!!) and walked on Jensen Beach. There’s some of the clearest water I’ve seen in the ocean there… Saturday we headed to Blind Creek Beach on Hutchinson Island after picking up a beach umbrella and some sandwiches. I’ll let you click that link if you’re curious as to what kind of beach this is…

Afterward we wanted to try somewhere else for dinner so we went to    It’s pretty chainy and touristy and the service was pretty bad even at the bar and they weren’t crowded. So we had one drink and went back to Conchy Joe’s for round 2! Altogether there we tried their conch chowder, snow crab legs, 2 different kinds of grilled shrimp, mahi mahi, plantains, more snow crab, wahoo, and swordfish… We ate really well!

Sunday morning we went over to Paradise Island Campground in Haines City where we had made some friends at the end of last summer. We had 3 days and 3 nights of fun with them. We rode motorcycles over to Cherry Pockets for some gigantic peel and eat shrimp and saw a baby gator swimming, played some cornhole, and had an overall great time! 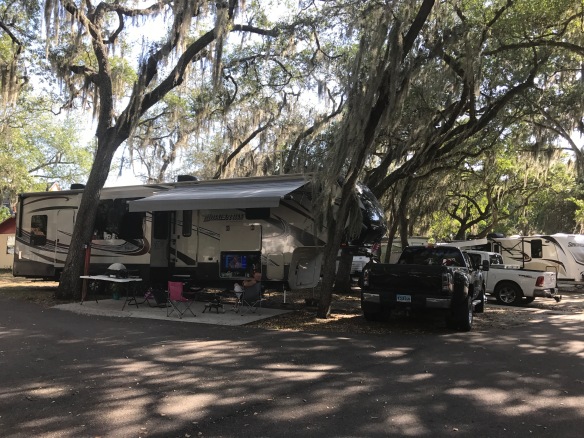 Tuesday morning we left early and headed back to Orange City thinking the truck would be there about noon. Allen got a call halfway there saying it wouldn’t be until noon the following day so we parked on site and started the generator. Once the sun went behind the trees we pulled out our 50′ 30amp homemade cord and some adapters and ran some 110 electric from the building on site. A couple of the guys showed up in the morning and they got the truck loaded. 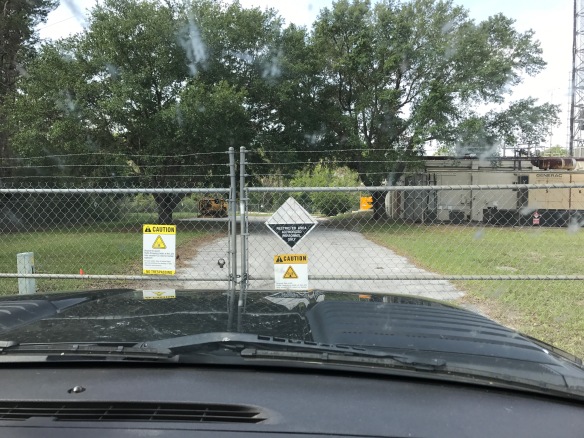 We headed out and now the job in Arkansas was put on hold so we came up to Chandler, IN for a week of OSHA classes at the shop. We are staying at Lynnville Park Campground next to the boss.

I’m not sure what’s on the agenda as far as the next job but I want to get somewhere for at least 2 weeks. Our back air conditioner went out when we got to Haines City. The condenser isn’t working, the fan just blows hot air. We tried replacing the tin can board (the motherboard basically) that we had gotten for the middle a/c (that magically started working again on its own) but that didn’t fix the problem. It’s covered under warranty but we need to be somewhere long enough to have a mobile tech come and (I think) replace it. From what I’ve read when the condenser goes out it’s cheaper to just get a new unit. It’s a closed system which means you can’t add freon unlike a car or truck so the whole condenser situation has to be replaced. 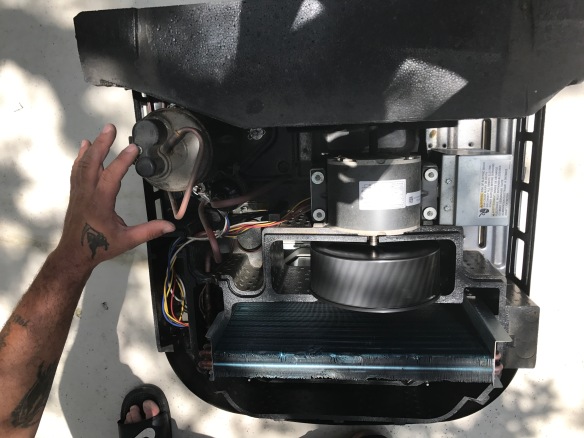 When we bought the camper we had a xzilon coating out on the outside that guarantees no waxing for 5years and included in that was the inside (all the wood and hard surfaces as well as something they put on the carpet to resist stains). With two years of moving and 2 little puppies (one of which was hard to potty train and turns 1 today!) it hasn’t done well at resisting those stains. So I called before we left Orange City and they want us to get two estimates from carpet cleaning companies then they’ll pay to have someone clean them. But, we have to be somewhere long enough for that to happen also which means I definitely need those two stationary weeks at a minimum to make that happen.

As Allen says, let’s let it play out… It usually works out how it needs to. So this week we are in Lynnville, IN and trying to organize our lives after our 2 weeks of moving and partying!