We got the h-e-double hockey sticks outta California yesterday! Good riddance… We were at Novato RV Park for 2 weeks too long.

Hakuna Matada = Leave the past behind you!

For the past couple weeks, I’ve been talking to Emily at Lippert Components. Lippert makes a ton of things RV related. They made our axles, slides, hydraulic leveling system, and I’m sure a ton more. (I think they even made the entry steps.)

When we stopped in Idaho at Allen’s favorite campground ever-if you decide to check it out, don’t forget your sunscreen!-, we noticed our front passenger side tire had gotten a LOT worse. For a while it had been wearing funny on the outside edge so we’d been keeping an eye on it. We decided to go ahead and change it out to be safe but that got me thinking about this “Correct Track” alignment system that came on the camper. The dealer originally told us we could do it ourselves but I wanted to be sure.

So Emily said if we could get over to the Lippert factory, they could check it out for us. They are also going to look at our bedroom slide that’s been messing up forever…

While we are in the area we’re going to take a tour of the Grand Design factory which should be pretty neat. They even said we could bring Charlie! I’m thinking I’ll put her in the new carrier we got for her… She kinda loves it!

Last night we decided to try our first BLM (Bureau of Land Management) stay! We always stay in RV parks (you can tell by our numerous reviews of them) with the occasional stop at Walmart or a truck stop (like we did outrunning storms when we left Oklahoma City!). We keep seeing all these cool pictures of people camped out in the middle of nowhere. Most of the time it’s free to camp on BLM land, other times there’s a small fee. 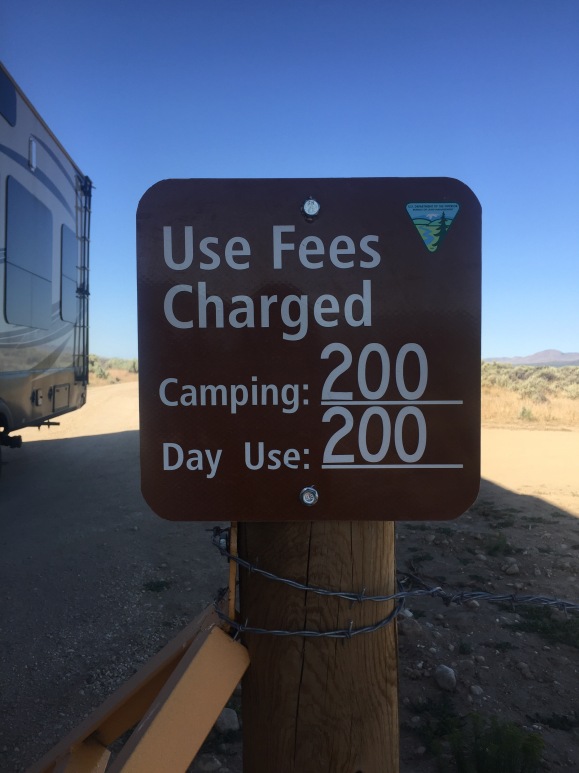 So I looked on BLM.gov and did some research, comparing satellite views with the Good Sam Trip Planner (which has been down a lot lately and I’m not too happy about it). Because we have a 43′ fifth wheel, we have to do prior research before getting somewhere we definitely can’t fit or shouldn’t be!

I found Zunino/Jiggs Reservoir about 30 miles south of Elko, NV (there was a Walmart we could overnight at just in case!). It was a tad difficult to find, but we managed. There were 3 little entrances. We missed the first one but got the second with a camp host. Allen asked him where he thought we should camp so he sent us over to the third entrance with 2 campsites to choose from. They each had fire rings, grills, and picnic tables. The fee was $2… The best $2 we ever spent!

The moon was almost full. There wasn’t a cloud in the sky. Apparently there had been some vandals the night before that had a fire with a bunch of plywood and pallet scraps that they left behind. So we cleaned up their mess and had a nice little fire. We made some hot dogs and sauerkraut over the fire, drank some beers, and enjoyed the wide open spaces. It was kind of great! And Charlie survived her 3rd birthday without being gobbled up by a rattlesnake or other creature that goes bump in the night!

This was our campsite.

We are trying to find another BLM site for tonight but I’m not exactly sure where we will end up… Somewhere in Wyoming for sure. I’m just glad we have this generator and huge holding tanks… It makes boondocking a whole lot easier!