But I never thought it could be this hard.

I’ve known a lot of loss and death in my life but this is by far the worst. My brother passed away suddenly on Thursday. He was only 31.

Allen came home early from work Thursday, which I thought was weird because I had just talked to him at lunch time. My mom had called him and asked him to tell me. I bought a plane ticket and packed my bag (well, I think maybe Allen packed most of it for me) then we went to the airport so I could get on a flight and be back in Cincinnati with my mom by midnight. When I got to the airport, I did the self check in thing then checked my bag and went to security. The security guard told me my ticket was for the following morning, Friday, at 7am. I lost it. Again. So then I had to go through waiting for Delta to figure out what happened. I wound up having to book another flight for 7am with American Airlines that got me here at 10:30am instead of the middle of the afternoon like Delta wanted to do. I’m still waiting for my refund from Delta. But I’m here.

My brother has struggled with addiction for a long time now. He’s been in and out of trouble for things related to drugs for the past 6yrs or so. (I.E. Stealing to get money for drugs, violating probation, failing drug tests…)  He just got out of prison on June 6th. Right after we had to leave Ohio and head down to Dallas. When I took Charlie swimming in Oklahoma City. I didn’t get to see him. We did FaceTime though. Not the same as a hug. My mom picked him up from prison and he was living with her. He found out that he was HIV positive this last time he went in, so he had just been to the doctor and was going to start medication in the next couple of weeks. His doctor told him and my mom that with medication he could live to be 60, 70, 80 years old.

I don’t know what happened or what kind of struggle he had in his head when he decided to use again. But I don’t understand it. He called me Thursday morning. He asked me what Charlie was doing. He couldn’t wait to meet her. I asked him what he’d been doing all morning. ~silence~ I asked him again. ~silence~ I thought it was weird but drugs never crossed my mind. I just thought he was being spacey like he sometimes got.  I just got kind of annoyed and told him if he wasn’t going to talk to me then I was hanging up. I hung up. My mom says I can’t think that I could’ve changed anything. But…

She came home from work, she cleans houses, at about 1pm and he was on the porch. He’d overdosed on heroin. He was already gone. I would give anything to have him back and anything to not let my mom have been through that. I guess the paramedics came and worked for an hour.

We went to plan the funeral Saturday. My step dad passed away 5yrs ago and we went to the same place. The price has tripled since then. We had to leave because we couldn’t afford it. That’s not a good feeling, to have to shop around for a funeral. But we found a place that was really nice. We are going to have a visitation and service on Wednesday evening then have him cremated. My mom wants to bury his ashes with his dad’s.

In the meantime, I miss Allen and Charlie like crazy and I so wish I could have both of them here with me. They are leaving Texas tomorrow to head out to San Francisco. I’m worried about them traveling by themselves but Allen says they’ll be fine. I remind him of fifty things Charlie related everyday it feels like. He jokingly reminded me yesterday that I’m missing out on some blogging opportunities driving cross country. Touché. But I will fly back to San Francisco at some point yet to be determined. (I for sure have to wait until I get my plane ticket refund).

We started a Go Fund Me page to help with the expenses. (If you would like to help, I would be so grateful) We wrote his obituary.  We picked out an outfit we think he would’ve loved.  (This pair of white skinny jeans he was loving!) I’m ordering a really pretty rainbow colored casket spray. (Gay Pride)  We’ve been making a list of songs he loved that we are going to play at the funeral.  We went through boxes of old pictures yesterday. 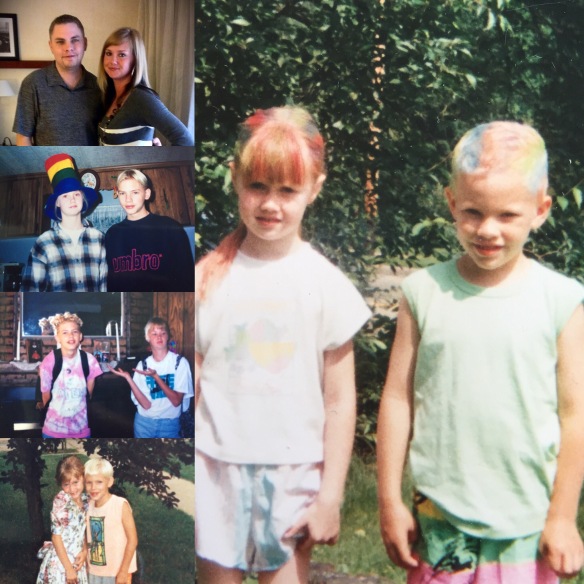 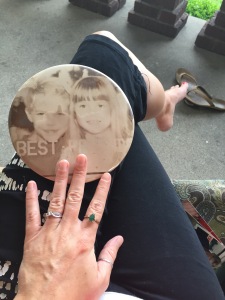 This is a button I found from probably kindergarten. I think I am going to wear it at the funeral.

But I never thought it could be this hard.

I love you Adam. And I will miss you forever.

2 thoughts on “Losing is Never Easy…”