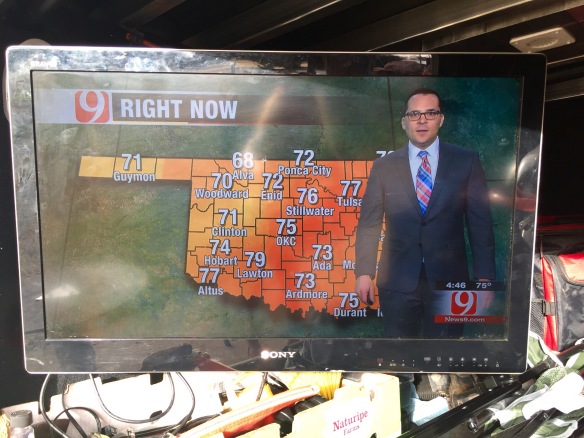 Allen’s really sick today (not the flu but some other kind of nasty virus… We went to the ER at 5:30am after being awake most of the night! -poor baby) but yesterday I was lucky enough to get him to drill a few holes for me. He actually got me my own adorable tool set for Valentine’s Day but it didn’t come with a drill to drill holes, only to tighten stuff… So he still has to help me out here and there!

When we left Dallas for Baton Rouge about a month or so ago, we had to bring these 3 spools of rope with us for work. So we wound up with one empty spool that was still in tact once they got the rope off. It wasn’t a super heavy, metal, sturdy thing like you normally think of, so it actually worked out really well for our camper lifestyle! 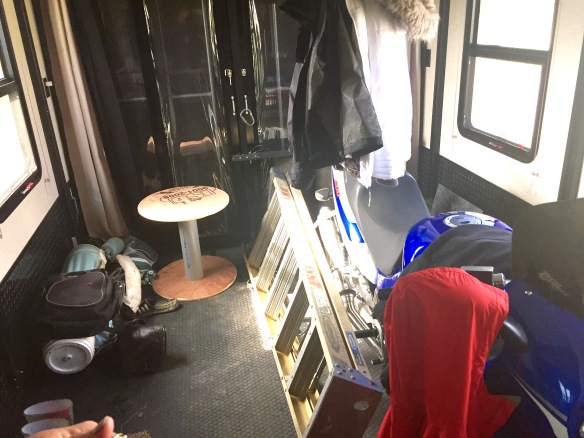 It’s basically made of plywood on either side with a piece of pvc pipe running up the middle, held together by three long all thread bolts and a couple nuts. It’s hollow in the middle with holes in the wood in either end.

I took it all apart then stained the two end pieces a dark brown color. I wanted to still see the printing through the stain. I also wanted to somehow cover the hole in the middle. I didn’t want a table with a hole in it! We had some aluminum left from when we redid the underbelly of the camper so I had Allen cut me a triangle of that and drill some holes in it for the bolts. I painted the pvc, aluminum and rusty nuts and bolts with silver and black spray paint that we had to kind of give it a rustic, old metal, look and feel. When I put it all together it was still wobbly from having those nuts on the bottom in the middle stick out.

U-Bolts fixed the wobble. I like how they look too. I wanted to add something else but Allen says to leave it as is.

Overall I’m happy with it!