Eustace is the most adorable little handful I’ve ever come across! There’s no shortage of laughs with this little guy. And we are EXHAUSTED!

Here’s the low down dirty scoop: Eustace is a 3am pooper. He will only go outside in the cover of darkness! During the day, not a chance! We can take a 45 minute walk around a tiny sliver of the campground (that’s how slow we are now) and he won’t do a thing. But as soon as we get back inside I’m following him around with a baggie! 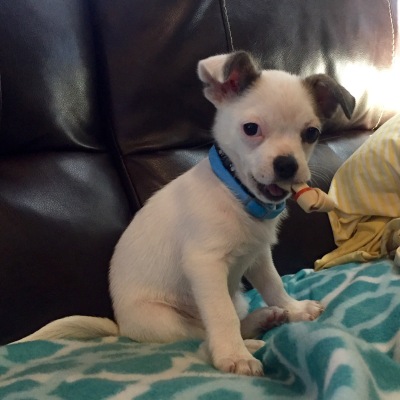 He’s such a tiny little pup, his bladder can’t hold much. So we are trying puppy pads for now. This helps a ton for 1am & 5am potty breaks! (Allen and I take turns for those.) During the day with no coaxing, I’d say he’s up to about 50% success with hitting the pad… It’s a work in progress! We picked up some training treats yesterday so maybe those will hammer it home for him!

Charlie is being a spectacular big sister. She’s so patient! Sometimes she even lets him steal her bone just so she can get a little peace and quiet… They are the absolute cutest when they are sleeping! 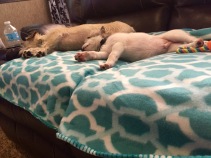 Eustace came with a bag of Puppy Chow that Charlie was trying to eat while he was sticking to her Rachael Ray food. So we nixxed the Puppy Chow and they are both on Rachael Ray (currently it’s Zero Grain Salmon but I switch it up for variety so next they’ll have Chicken & Veggies). We got a new set of bowls yesterday so we have the same set up on opposite sides of the living room, so they can both eat alone if they want to and there will be no fighting! (Luckily we’ve only had one scrappy little fight between them… Neither one was backing down!) 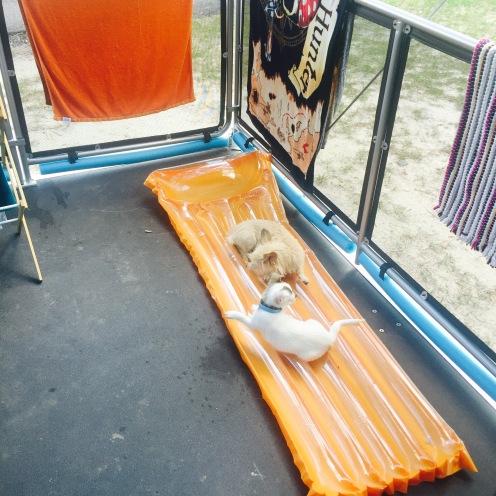 Charlie is a talker for sure, as much as we’ve tried to quiet her down since day one. And Eustace is quickly learning her manners… He barked at a stranger yesterday and he will bark at Charlie trying to get her to play with him. He’s so full of energy! Charlie is definitely getting a work out!

They crack me up. They’ve been spending their days digging holes in the sand, hunting lizards, taking really long walks, chewing on bully sticks and sleeping! 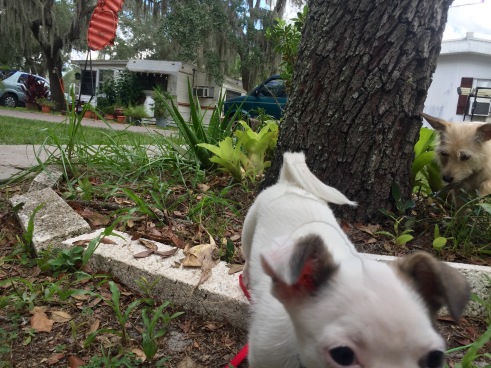 This is lizard haven… right in the yard… lucky pups!

I have been able to make it to the pool a little each day. Paradise Island RV Park has a huge pool, one of the cleanest we’ve seen for sure. Look for a review coming soon! I still need to check out some things and snap some photos… Harder to do with 2 leashes in hand rather than 1! We should be here about a month… a little longer than we first thought, but no complaints here! I’d be happy with Florida until Christmas!

Allen actually put the pink flamingo out all on his own without me having to ask!

Sunday, Eustace has an appointment at Banfield to get his first shots. There’s a Farmers Market not too far that we want to try and get to also, so we’ll see what we can squeeze in.

Our Dometic ventless washer dryer combo unit keeps throwing an alarm code on the dry cycle so we really need to take it out and dig into it some, hopefully this weekend if we get time. That’s a whole post in and of itself!

Having a brand new puppy is time consuming for sure!!!

2 thoughts on “Is this what having a new baby is like??!”